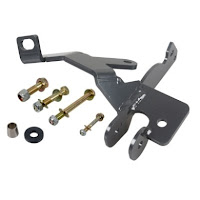 First off I would like to say that after getting these parts on my truck I could not be happier. These are both very stout pieces that would make for a great upgrade on any 2nd gen. Dodge pickup. However, I did run into a few problems with clearance issues between the Track bar and Bracket. This will be a basic overview of those problems and the steps that were taken to resolve them. This is not meant to be a complete installation Guide. The installation instructions that are provided on BDs’ website are excellent and I would recommend printing them out and having them handy during your install.
I followed the install guide when installing the new bracket and everything went very smooth and seemed to fall right into place. After I got that all torque down I proceeded to install the track bar (with full weight on the trucks suspension.) This is when I noticed that I had a clearance issue with the bar contacting the bracket where the bar bends to clear the front axles differential.

The first thing I did was email these pictures to Craig at Strapt Performance. I later got I Contact with Craig who had talked to one of the guys over at Carli and said that they had seen this before and it was okay to go ahead and clearance the bracket about  1/16th of an inch to clear the track bar.

With the bracket bolted up and in its correct place I marked the bracket with a sharpie where I thought it would need to be ground down. I removed the bracket and ground it down with a sanding disk on a 4 inch grinder. Below you can see the slight indent where I took material off of the bottom of the bracket (probably closer to 1/8th inch.) I also took about 1/16th off of the inside of the bracket. 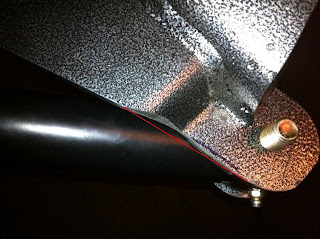 With The track bar and bracket out of the truck I slid the bolt through and worked the bar through its full range of motion and there seemed to be no contact, so I went ahead and bolted the bracket back up and again tried to install the track bar.

This is where I ran into my second problem. Again with full weight on the truck I tried aligning the bushing with the holes in the bracket and was able to get the bolt through the front hole but now on the back side of the bracket the it did not line up and in fact was about half of the width of the bolt off. I also tried with the axle hanging with no weight on suspension. Unfortunately I do not have a picture of this.

I tried to see what it was going to take to get the bolt through by removing all of the bolts in the bracket with the exception of the main bolt that runs through the hole where the stock track bar ball joint bolts. This bolt I did loosen almost all the way to allow move to maneuver the bracket around. I was able to get the bolt through the bracket and bushing of the track bar now but the bracket was very cockeyed on the truck and the other bolt holes did not line up. The picture below shows how far off the bracket is where it bolts to the driver side frame rail. 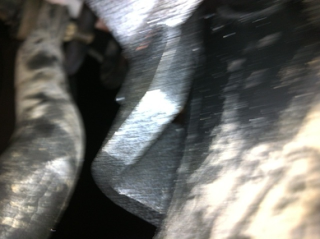 I again called Craig in search of guidance. This seemed to not be a very common problem at all. Talking with his contact at Carli it was mentioned that these 2nd gen trucks come with a variety of chassis set ups that make it hard to get parts like these to align perfectly on every truck. Talking back and forth regarding deflection of the Bushing and how much was acceptable, we decided that I should give it another go and if need be I would weld the bracket in place to where everything was aligned and free from binding.

I bolted the bracket up very loosely and installed the track bar and was able to get the bolt through and get the bar fully bolted in place. As I tightened the bolts on the bracket to the frame I could see the bracket start to shift. When I did this the clearance issues I had in the beginning came back.

I took the bracket off and got in there with a grinder and really took some material off this time, off the bottom and on the inside and then welded a gusset on the outside to strengthen things back up. In the picture you can see how thin I got the metal where the bend is. I wanted no chance of contact. 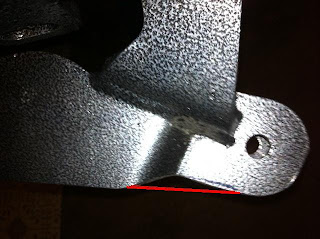 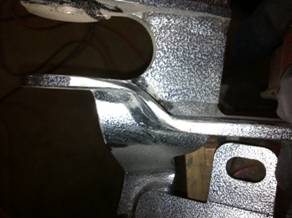 Now with the gusset welded in. 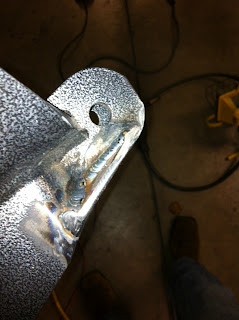 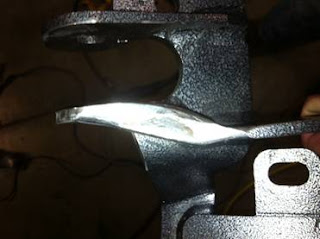 I know that not every truck is going to be this difficult, in fact probably very few, but for those that are hopefully this will give some guidance on how to go about getting things to work and I guarantee you that the results are worth it!!
Posted by Unknown at 12:07 PM