Fred’s 2012 Dodge Ram Megacab with all the bells and whistles.

Fred Williams of Phoenix AZ approached STRAPT Performance with the same issue most people have when owning a Heavy Duty truck. " How do I make my 8,000lb truck ride better??" Like Fred a lot of people are getting tired of getting beat up from the day to day to commute caused by terrible road conditions and poor suspension engineering. The fix for the most part is simple, but usually the training process can be over whelming. Fred wanted to learn what could be possible with a engineered system that was tuned for his truck. Luckily for us Fred had an open mind for what we were about to tell him. Everything he knew about a Heavy Duty suspension was getting tossed out the window. It wasn't long after that Fred learned that there are "Suspension Systems" and there is "Lift kits". From previous experiences Fred knew that a lift kit did only one thing, and that was to clear big tires. For most people a "Lift Kit" serves a great purpose. May it be a set of rims and tires they want to clear or just have the lifted look, it suites their needs. However.... Most of those people will agree that they would love for it to drive smoother on the road...

Enter the engineered suspension world of Carli suspension. Years and years of testing have gone into making the Heavy Duty truck handle like a slot car while advancing the over all smoothness of your old Grandmas Cadillac, you know the cars I'm talking about. Every grand parent had some sort of big car that you could fit 10 people in and still hit a speed bump doing 60.

Back to the story about Fred....

One of the nice things about us at STRAPT Performance  is we have the trucks on hand to give people a real world experience of what a "Tuned Truck" can be capable of. After about an hour of walking around a truck a decided to cut the chase and take Fred for a ride. This is where my job gets fun...

Like every ride along I do I always make the initial as boring as can be. I get people to start thinking that this is nothing more then a "Lifted Truck". I usually start talking about personal things and getting an over all feel for who our potential customer could be. Then after about 5 miles I typically ask them what they think. It's usually the same response. "Ah yeah the truck drives nice I can feel a difference". Deep down I know they are still unsure of what to think, then right about there is when I hit our little Urban Hot Lap. I usually find something that gets just the right response out of them, just enough for them to clinch the grab handle. Once I hit something that puts a perspective on things they are hooked. In Fred's case this was no different.

Fred just got done taking a hot lap in a truck that was equipped with a Carli Pintop 2.5 system . Like most people he was speechless…After we parked he just starred at the truck trying to figure out how this is even possible? I told him it's all in the balance of finding the right spring to weight ratio and having a very well engineered shock. This was start of a great relationship...


So as we talked more with Fred we wanted him to learn about the different shock packages that Carli offers and additional upgrade features like Carli extended control arms and full replacement leaf springs. After careful decision making he was set on the King 2.5 Pintop System with Sage Carli's ultra plush valving... I wonder why?? A couple weeks later the plan to have STRAPT Performance build his version of a “street driving couch” was in motion.

Fred brought us his beautiful 2012 Dodge Ram 2500 Megacab Laramie with only 4,000 miles on it - this truck was amazing. It had features that I didn't even know it was possible to put in a truck, I'm talking fans in the seats, a/c in the steering wheel,  mirrors that did all sorts of fancy things when you turned the truck on. I mean this things had it all...

What a perfect candidate! 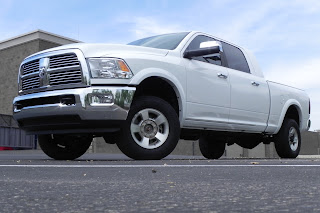 This was how it arrived to STRAPT Performance. Very bland. Almost looks like a neutered dog. Not a bad looking truck but there was much that needed to be done. (Just a side note, the stock Laramie wheels were sold off and these were tossed on as temporary tires).

After removing the OEM suspension it was time to give this truck its promised overhaul. 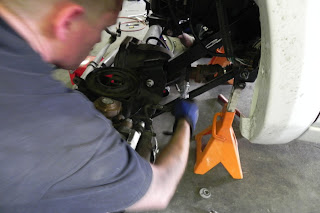 Here is the Carli valved King shocks in all their glory. These have a specially designed piston developed by Carli to achieve maximum road comfort and great off road characteristics. Getting a Dodge Ram 2500 or 3500 to ride as soft as a Baja Perunner doesn't get much better then this. 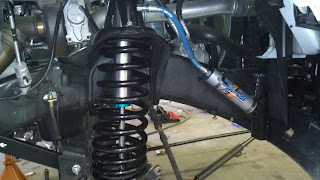 Fred had his eyes on a set of MHT Fuel wheels called the Krank. He first selected a set of 20" rims but after educating him on the overall ride qualities he is about to achieve with his new kit it was then decided to not sacrifice to much and go with an 18" rim. It proved to be a much better choice.
Here is the wheel right out of the box. 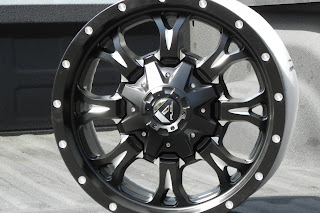 The spec’s of this rim measured in at an 18x9 with 5.75” +18mm offset. This is a great size when stepping into a 3” suspension system. as it provides plenty of tire to fender clearance and tire to control arm clearance.

After a day of working hard on the truck and installing the Carli Full Leaf Spring Pack it was time to weld on the limit straps. The Carli limit straps are a must with this shock package because there is not an internal stop built in. This means if the axle were to reach maximum droop the shocks would be the only thing to stop it. Not good! 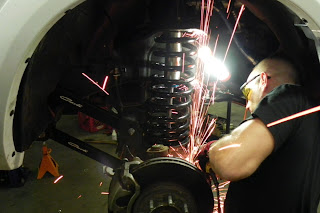 This was pretty much the final step. After a little bit of road testing to make sure everything was tight it was off to do some “Urban” off roading..

As expected the truck drove like a pillow. It was very smooth on wash board roads and very responsive when the driver gave the truck input…

I’d say the final product looks good but has the qualities you'd expect of a sleeper. From a distance the truck looks just like any old truck with a leveling kit and some 35s. Obviously that is far from what this truck is about… It truly is a wolf in sheep’s clothing. 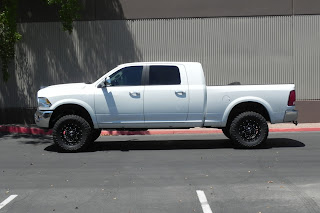 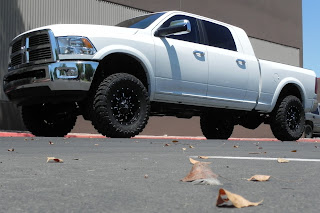 Click below to see the truck in action. A little before and after eye candy to compare.